Rise of the Coding Bootcamps

The great demand for skilled software developers has led to the launch of more than 300 so called Coding Bootcamps in the last years, mainly in the US but also worldwide. The promise of these camps sounds tempting, but what lies behind it? Will these bootcamps soon replace entire study programs?

“Learn software development in 12 weeks and kickstart your career as a successful programmer.” – many bootcamps advertise their programs with this appealing promise.

Many Camps don’t even charge a fee upfront but take a percentage of the first earnings after completing the program instead. Others guarantee to return the tuition fees if the participant is not able to find a decent job as a software developer after having completed the program. Accordingly many programs charge a high price of up to $20.000.

Now the first Coding Bootcamps like Stackademy or Hackership have entered the German market. The German Startup CareerFoundry on the other hand offers six-months e-learning courses in the fields of web development, UX design and UI design and guarantees your money back if you haven’t found the job of your dreams within six months after completing the program.

The question is: Can they deliver on that promise or are they just exploiting the hopes of people who look for a quick way to start or boost their career in software development? In other words: Do these programs only offer factual knowledge that will be outdated soon or are they able to provide their participants with skills and abilities that will help them to keep up with the dynamic development of technology 10 years from now and to have a long and successful career.

Over 16,000 people graduated from coding bootcamps last year According to the Bootcamp Market Size Study 2015 by Course Report

Looking at the growing numbers, many participants seem to believe the promises. In the United States the number of graduates grew from 6,740 in 2014 to over 16,000 in 2015 according to the estimates of Course Report. Revenue has increased correspondingly from $52 million to $172 million in this sector.

A recent survey among 665 graduates from 44 different Coding Schools indicates, that most of the programs live up to their promise – at least in a short term view. 4 months after completing the program, 89 percent of graduates had a new job, their salary rose by an average of $18,000, making the average tuition of $11,852 for a Boot Camp program a good investment. 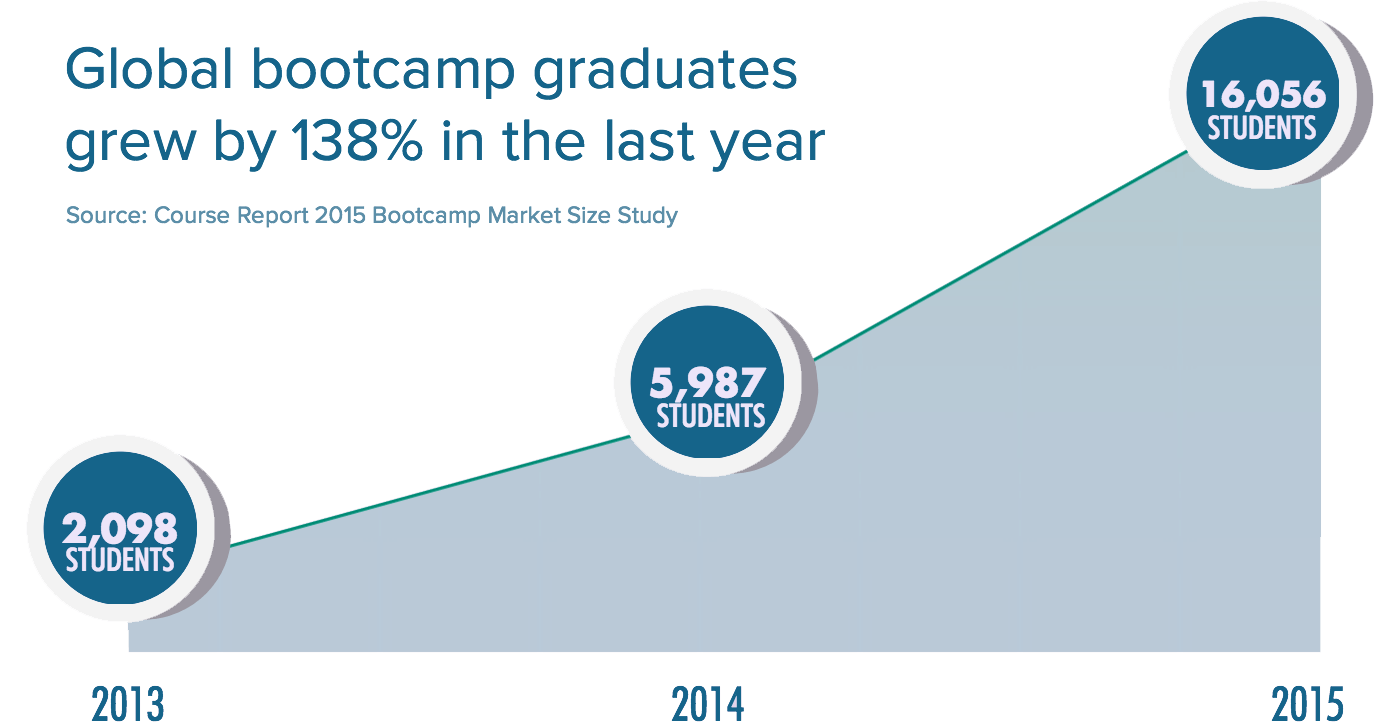 Looking at these figures it is hard not to extensively agree with those who see coding bootcamps as the future of education and at the same time proclaim the downfall of existing computer science programs. Roshan Choxi writes about his (as co-founder of a bootcamp perhaps not entirely unbiased) view on the subject in his article “Coding bootcamps are replacing computer science degrees” and gives as an example a quote from Daniel Gelernter, CEO of tech startup Dittach:

There isn’t a single course in iPhone or Android development in the computer science departments of Yale or Princeton. Harvard has one, but you can’t make a good developer in one term. So if a college graduate has the coding skills that tech startups need, he most likely learned them on his own, in between problem sets. As one of my developers told me: ‘The people who were good at the school part of computer science—just weren’t good developers.’ My experience in hiring shows exactly that.

[…] But my lead developer didn’t graduate from college, and neither did my other full-stack developer. I do have one developer with a degree in electrical engineering: did he learn any of his development skills in college, I ask? No.

Are coding bootcamps the better alternative to higher education programs? Do the existing universities have to fear this development? Once again, the graduate survey provides interesting insights. According to the survey the average participant is 31 years old, has already 7.5 years of working experience and (in almost 80 percent of the participants) at least a bachelor’s degree. Less than three percent of respondents have no college experience at all.

What does it mean that most of those who successfully finish a coding bootcamp already have a higher education degree? Could it be that this exact combination of an existing academic education, several years of working experience and a high-intensity coding training is the key to success?

In a way these bootcamp graduates with an academic degree in a different subject are what Tim Brown, CEO of IDEO, describes as T-shaped professionals.

It fits the picture that most criticism of CS graduates is aimed at their missing ability to cooperate with “non-techies” and their lack of practical, communicative and social skills.

In contrast, the typical bootcamp graduate had already gained the academic and social learning experience associated with a bachelor’s degree as well as expert knowledge from his former field of study before starting the bootcamp. This makes him much more capable of communicating and cooperating with “non-techies”.

Some universities have already begun to understand bootcamps not as a threat but as a chance and to integrate them into their existing programs. This can be seen as a sign of openness, but also as an indication that these universities have recognized the weakness of their study programs, but are not able or willing to make changes accordingly.

The average tuition for a bootcamp is $11,000 According to the Bootcamp Market Size Study 2015 by Course Report

Should we therefore advise young people to seek out some academic degree and then attend a Coding Bootcamp? Probably not. Instead, the question should be: How should an educational program be designed to combine the advantages of an academic educational experience with those aspects that account for the attractiveness of Coding Bootcamps in the eyes of the participants and the future employers?

Imagine a project-based study program, in which the students start working on challenging projects from day one instead of sitting passively in theory lectures. The teachers act as coaches and assist their students in their professional and personal development and help them to acquire the necessary theoretical and methodological knowledge at a time, when the practical relevance of this knowledge can be derived from project experience.

A study program like this would provide a setting in which the intensive project experience would be embedded in a larger learning context that enables a guided development of theoretical, social and communicative skills. All graduates of such a program would have a track record of successful projects as well as an extensive network of potential employers or co-founders provided by the projects they have worked on.

In parts this approach is realized by startups like Make School and Holberton School, both located in San Francisco. They both offer a two-year project-based education program, positioned as college replacement. In our opinion a very promising approach that combines the best of both worlds.

Let’s hope that the existing universities do not consider the success of coding bootcamps a threat but an impulse to revise their own study programs and modernize their teaching and learning strategies.

And what about the idea of a project-based study program as described above – if there is not already such a university, we should really build one…

Upcoming blog post: Why coding bootcamps are significantly more successful in attracting female participants than existing study programs in Germany and the US and what we can learn from this observation when it comes to motivating significantly more women to choose a career in digital.